11th-17th June is London Tech Week. As you probably know, it’s an event for the likes of Google and Microsoft to talk about how marvellous and “disruptive” they are.

Here at Outlandish we’re thinking to organise an event as a part of Tech Week to talk about CoTech. We’re thinking something along the lines of “From Disruption to Co-Operation: improving efficiency and productivity via collaboration” or something. It should be a good opportunity to reach new audiences, collaborators, clients, maybe even a few enemies! Hopefully we can convert some new start-ups, and even established companies.

What do people think? Is anyone up for getting involved? We would want to advertise through the official Tech Week site which costs £300 for a normal listing or £900 for a premium listing. So if each co-op chipped in £10-30 we could do that. We’re thinking an evening event, but it could also be all day. And we can host at Space4, or hire out somewhere swankier and more central perhaps if people are keen. It would be great to get a sense if anyone is:

Let me know. Thanks.

Sounds like an awesome idea - could get some more good PR and that. I’m sure Outlandish is good for a hundred quid or so, and would like to support the event. Newspeak House could be a good venue?

I’m sure Autonomic can chip in a small amount.

We really need to redo that homepage

Could resist setting this up.
https://fund.coops.tech/#/buckets/2

Ooh-er very fancy! Thanks everyone who’s contributed. Spread the word if you speak to other CoTech folk who don’t use this forum much. And do send me ideas if you have em.

If anyone doesn’t have a CoBudget login and would like one, they can email joaquim@outlandish.com and ask him to set you up with one.

Ditto! I feel like it’s a way to get potential startups et al to realise that they should be structured as a coop. Plus I love the idea of subverting tech week and tech week lingo. Disrupt the “disruption” indeed!

I think this is a great idea Polly. About time!

Yes excellent idea, happy to assist with drafting the outline for the event
and the ad, if that might be helpful. And can probably get Small Axe to
throw in some cash also if needed.

So far we have funded £181 of this fund. This is a bit of a nudge to anyone who’s not chipped in but would like to, to put something in the pot now. Thanks to those who’ve said they might be able to pitch in a bit more if required - I’d hold off for now until we can get more of an idea from across network. Also, the £300 is only the bare minimum to list the event - it doesn’t include anything like venue hire, organisational time, booze etc.

Having spoken to some people here we’re thinking we’d like to make the theme more sales-focused. So rather than something about the philosophy of collaboration, make it more along the lines of 'why you should hire a co-op rather than a normal agency. Does anyone have any reflections or suggestions on this? Or another theme that would prompt you to chip in?

I would still really love to get this to happen. I think that by advertising in TechWeek we have a good chance of attracting clients who aren’t in our normal catchment.

Therefore I’d suggest that we give it another week or so to see who can put some more money in and/or develop the theme and programme. If neither of these happen we should think about a scaled-back event to coincide with Tech Week (possibly at Space4) that we don’t advertise with TechWeek (thus saving £300).

Let me know what you all think.

I’ve started thinking a bit about different language for why its better to hire tech co-ops in this group pitch project. Key thing I think is need to connect to actual objective realities about co-ops (or a co-op consortium), directly to qualities that we know all clients want in their agencies.

The two main ones we’re highlighting at the moment for CoTech in this project are:

Both need work, especially the second which is a bit of a fudge, and only relevant when hiring a group of companies. There’s no mention of lower price currently - am a bit wary about going there without knowing thats definitely true in all cases, and also because that approach can backfire sometimes in implying lower quality.

For the advert (if it happens), I would suggest some pretty direct language to grab people’s attention - along the lines of ‘Keep hiring tech agencies with external shareholders, and you’ll keep getting ripped off’. Then listing out reasons why tech agencies owned by the people who do the work are better - reliablity, honesty, transparency etc, some examples of the big companies/orgs we’ve worked with, that sort of thing.

To be honest its a bit mad that we haven’t collectively worked out an agreed line on this already! Should almost be the first priority given that we are all co-ops, all trying to sell that identity as an advantage to potential clients. And I’m sure we have lots of experience of whats worked in practice in the past.

Maybe its worth a group meeting or creative session some point in coming weeks to work on that? Would be happy to help organise if thats of interest to anyone (and Space4 can host…?)

Oh and if we don’t do the advert (or as well) we could think about some sort of guerilla marketing around the event potentially? Just a thought.

For some reason I’ve only just noticed your response on this thread. Sorry!!

You’re always welcome to have a meeting here. I kind of thought that this is what the branding group had been working on. Where did that go?

I think that the 2 things you’ve mentioned here are generally how we try to frame it here at Outlandish. There’s a blog article here which is a little dated but still pretty pertinent: 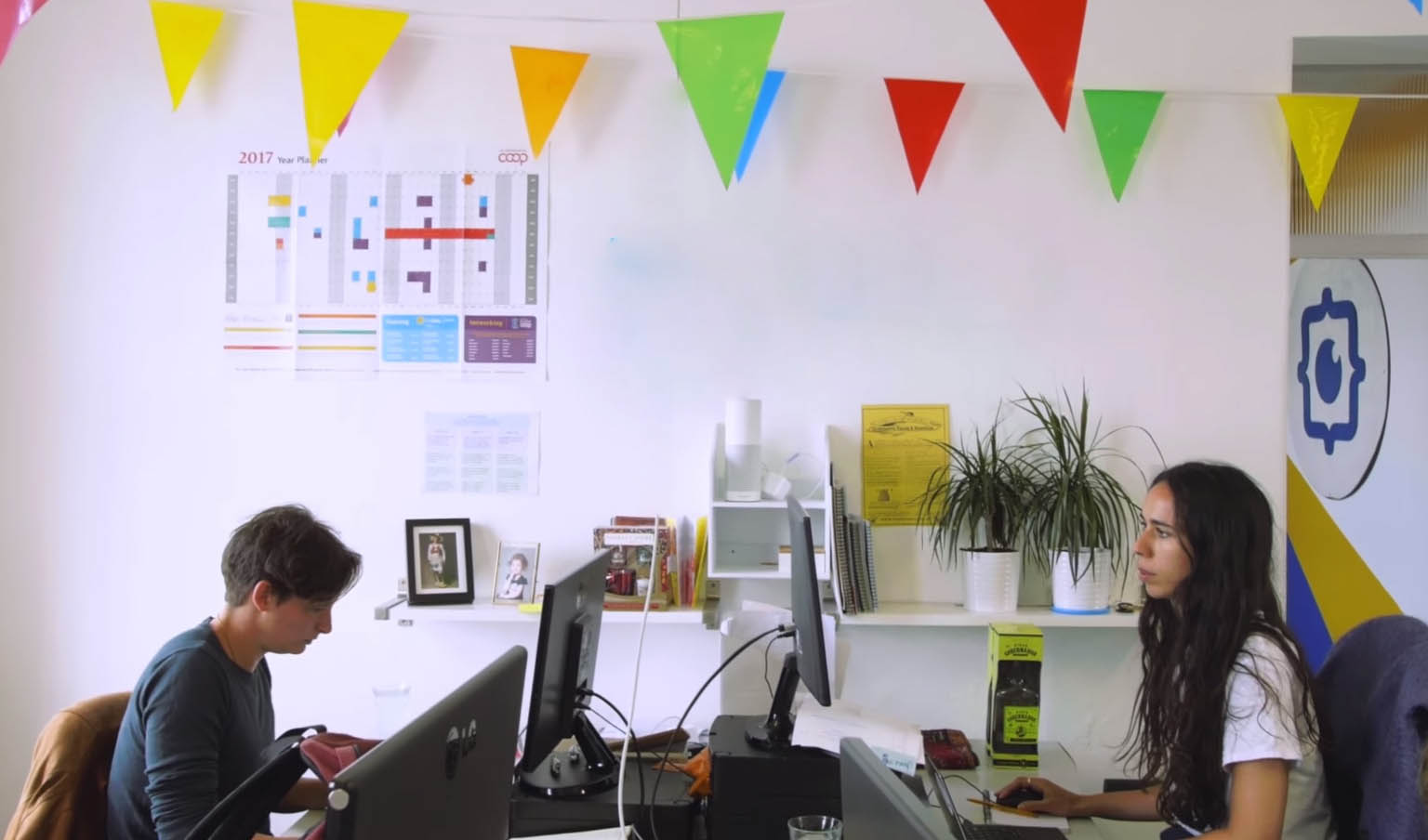 Last week we were super excited to see ourselves featured in Co-operatives UK’s report on the 2017 co-operative...

It’s looking fairly unlikely that we’ll get the financial buy-in to do an official Tech Week event, but I’d be very up for chatting about some guerilla marketing and some concurrent events at S4.

Branding group met a couple of months back, but we didn’t manage to get a date for a follow up. I’ll probably have another go once we complete this bit of work looking at Co-op group - we’ve made some progress on positioning and copy in the process I think.

Have emailed you about another event, will probably call in at some point this week and we can chat about Tech Week then.

I think this is a great idea and would chip-in too if I’d gotten around to making United Diversity member of CoTech and had a CoBudget login!

Richard Edwards (Outlandish), Dan Stanley (Small Axe/various), Szczepan (Animorph) and I have been having some chats to move this along. Our preference for the event would be to host it at Newspeak House (swanky, Shoreditch), advertise through Tech Week promo, have a couple of short talks, but mainly try to sell CoTech by having lots of our people in the room, chatting with the guests that we hope to attract through Tech Week.

However, we’ve also been pricing up the above and it would come out at something like £2.6k - we’d recoup about £1k from ticket/drink sales so total cost would be £1.6k roughly. We currently have £222 in the CoBudget pot and even though I know some people have kindly offered to put it a bit more, we’re still way off the mark.

Therefore we’re proposing to host the event at Space4 which saves us a lot of money since hosting at Newspeak was one of the larger costs. We’d still advertise through Tech Week and we’d still brand it as a CoTech event, so hoping to bring the benefits and exposure to the whole network. We’d have a few short talks, followed by a knees-up (talker slots open, let me know if you’re interested).

The bizdev case for this event is that it’ll get our name in front of lots of people from big companies, who are commissioning tech projects: they’re interested in ‘disruption’, may want to learn more about flat structures, and may want to have more social responsibility - we can sell CoTech businesses both in terms of our tech work and as thought leaders in the field of non-hierarchical governance in the teach world. We’d also see this as a networking and socialising opportunity for CoTech members who can get to London.

Bare in mind that we’re seeing this year as a foot-in-the-door, making a name for ourselves so we can attempt something bigger next year - along the lines of ‘The Alternative London Tech Week’.

What do people think?

Is anyone else up for chipping in to such an event? The more people who can chip in, the cheaper the tickets will be!

Hosting an event as part of London Tech Week sounds great to me.

Thanks for keeping the discussion going, Polly.

So it sounds like we’ve got a space (Space4), some ad copy (Dan?), an organiser (Polly?) and financial support pledged from Autonomic, Agile Collective, Animorph, The Dot Project, Wave, Go Free Range and Outlandish. It’s coming along, team

Polly - Let me know if you want us to pay for the ad directly or whether you want to invoice us.

Wow this is great news. Thanks GFR (@chrisroos)

Got a Outlandish team meeting this afternoon so I’ll get back to you a bit later with progress.