Co-op Forum for all (not just techies)

I was speaking to @chris in the Square Pig pub on Friday night, just after @harry put £1,000 behind the bar and told us to “go crazy, its on me lads” then left

I’ve been having various discussion with co-operators at different levels over the last number of months; techies, CEOs, operational people - all sorts. I think we’re missing a single ‘goto’ place for discussions, and maybe this is the place. Any thoughts on whether we should just be encouraging anyone related to co-ops to sign up here, or creating a new forum with Cotech as a category within it?

This place is nothing short of brilliant, but my only worry is, it may be seen as specific to Cotech instead of the wider movement - at least the logo at the top if nothing else.

Maybe a new forum is the answer, maybe not - but having hundreds of different places tends to discourage people from coming together (they get forgotten). I agree protocols is the future, but centralisation I suspect is the answer right now

I had several similar conversations at OPEN, but consensus seemed to be that the CoTech forum is working as it has a focus. CUK host several other ‘thematic’ forums (such as the Community Shares Practitioner and Community Energy networks) and have found the focus of these to be the key to generating good content/engagement. The Hive’s Online Community is a more open/general forum and has proven useful for some, and less so for others. I don’t think there’s a silver bullet to convening the movement in one space, but keen to be proven wrong and happy to help out if others have ideas.

Thanks for replying @Jamesdlv. The Hive Online Community is a good example - the problem is I’m not going to convince people in the Retail Societies to sign up, as they’re going to say the Hive is nothing to do with them or their requirements.

What’s the underlying thing that brings us all together? Co-op. Not tech, not startups, not pubs (sometimes). For example, I’d love to be able to look at my unreads and read a thread about latest technology, alongside a thread about a Introductory thread for a new worker co-op established in Brazil growing mushrooms, alongside a thread from a retail society talking about best practice filling in their multibuy claim forms.

It was raised at Open Co-op, there is no single location for all the attendees to come together after the conference - we mostly know some of the people through twitter and other mediums. I’d love to see a single location chosen and then supported by the early adoptors (whether its here, loomio, social.coop or anywhere) and then becomes the goto place for co-op discussion. I think we’ll massively help the cause by doing this.

Voice from the United States here. Given that i am in a tech worker coop, but not the target audience of this forum, and also because i’m fairly obsessed with scaling communication without wasting time (which becomes an issue whenever we try to make a community bigger, in geographic or topic area scope, please do pull me into any effort to scale up in some way.

My preference would be worldwide. There’s some great co-op people from all over the world; put us all together and I think we can achieve some amazing things over the next few years.

Suggest it to the ICA?

CUK host several other ‘thematic’ forums (such as the Community Shares Practitioner and Community Energy networks) and have found the focus of these to be the key to generating good content/engagement.

I can second that those are great groups (although they’d possibly be even greater as a Discourse Forum rather than Google Groups, but still: just having all the knowledgeable people in one place really does help).

The Hive’s Online Community is a more open/general forum and has proven useful for some, and less so for others.

IMHO that’d be a LOT more useful if it were a Discourse forum like this one.

It was raised at Open Co-op, there is no single location for all the attendees to come together after the conference

Last year we set-up https://discuss.open.coop/ which is actually still running, but it didn’t get any use/ traction. This CoTech forum has got traction and is now very good/ useful because it was set-up by a active network or people using it.

I wasn’t involved in organising this year but note this new Discuss page pointing to this forum and a couple of other relevant places:

There are lots of places to get involved with platform co-ops and related movements. The Platform Co-op discussion list is a great place to start. Run by our friends from Platform.coop the list has lively chat and a good community focused...

I’m involved with WeCo, a platform cooperative Reddit replacement with extra features. It allows people to share and upvote links and posts, comment and create polls, along with sorting posts by their type and category (or branch as we call it). WeCo has a branch for cooperatives with currently 130 posts. WeCo, unlike Reddit, allows creating branches inside branches, and in the coop branch this means branches for different types of cooperatives. Here’s what the co-op branch currently looks like:

But if you want to be more specific you can go further to check only posts about utility or retailer cooperatives:

And just when you thought you have reached the limits, the utility cooperatives has sub-branches for electric and water cooperatives:

And we could continue this to a level of individual cooperatives, or even branches of a cooperative. 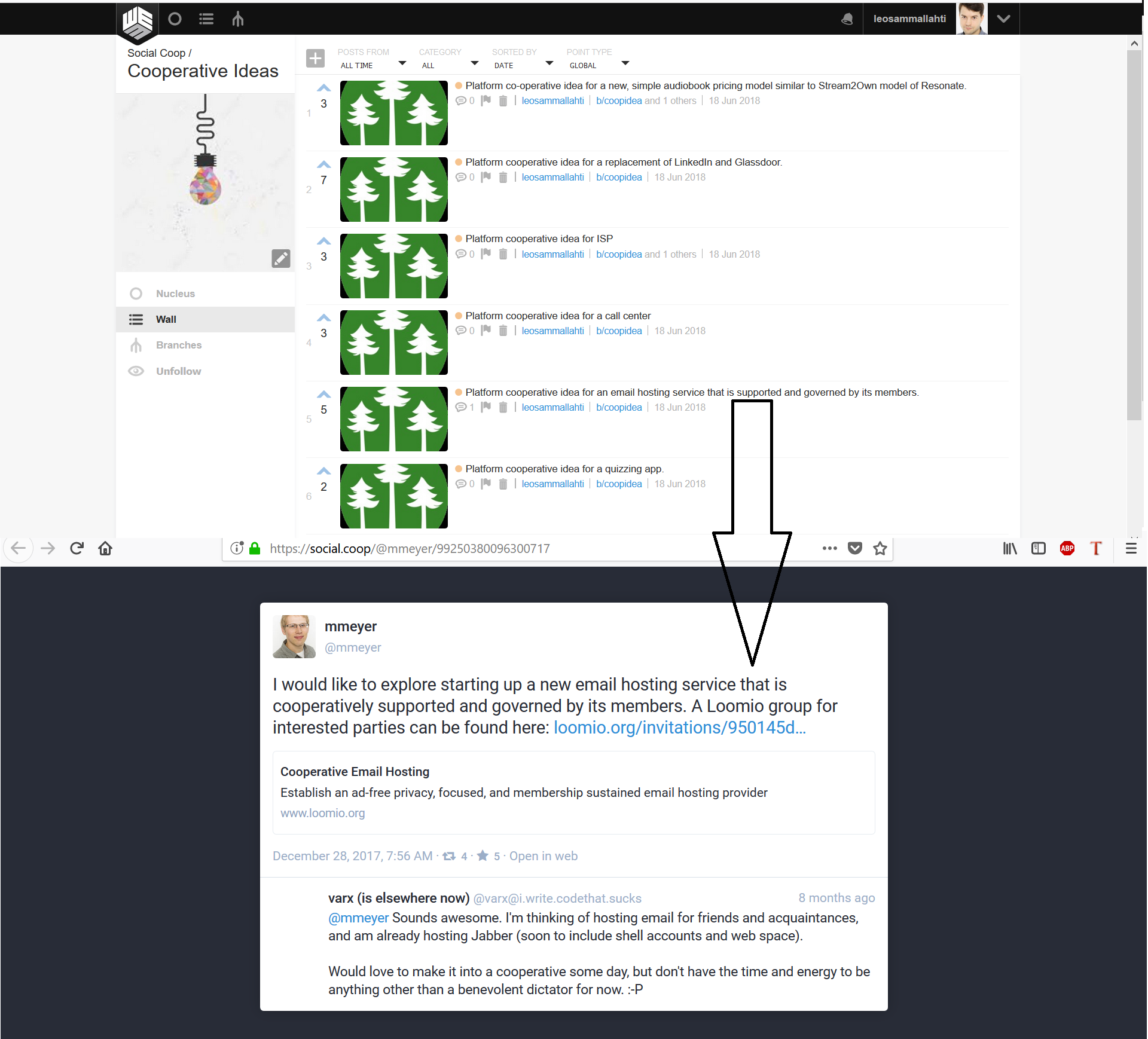 Been also thinking of having an annual poll on the most brilliant platform cooperative added to the Internet Of Ownership directory that year. I could even match every vote with some small donation to the coop that receives the vote. Hopefully that or some similar polls could help people from CoTech, Platform6, Coop Exchange, etc. to see new projects to participate in.

I’m planning to message social coop and Internet Of Ownership about this later this week. It’s not very active as we have not done almost any outreach for WeCo yet (we are starting out soon). 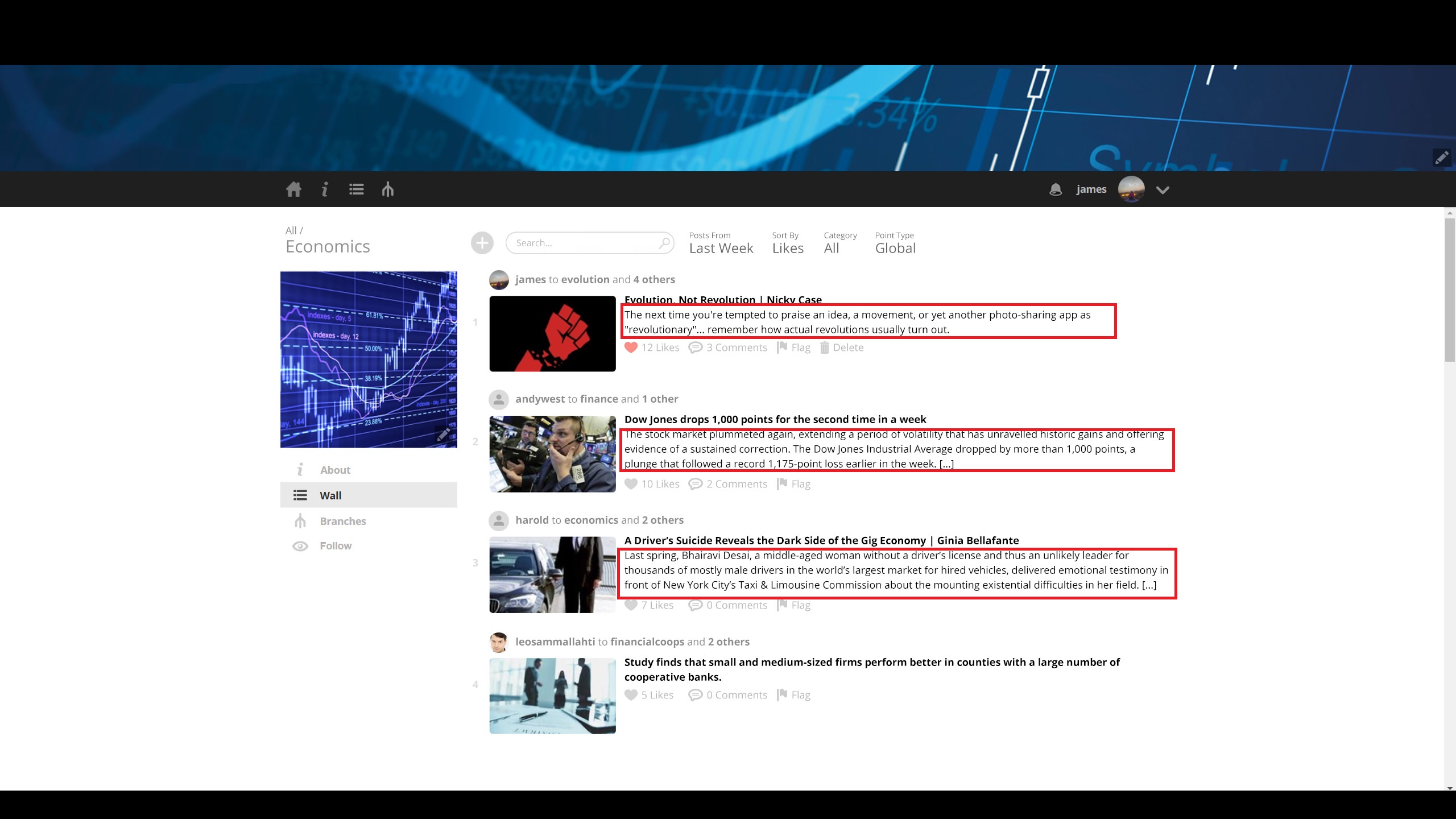 If branches could choose how long descriptions they would allow, we could have for example a branch for ”Cooperative Research” that would include studies about cooperatives. The wall could show the name of the study, along with a description long enough to include the whole abstract. So with few clicks, you could see the most upvoted study on cooperatives this week/month/year, read the abstract, and give it an upvote or a comment if you like without exiting the wall.

List of proposals for new features (such as more sophisticated polling tools, similar to those in Loomio) can be found here, and I have another comment on CoTech forum describing the decision making pipeline.

Since WeCo is not only dedicated to coops, but allows creation of branches of any subject, it also allows cooperative enthusiasts to talk about other shared interests too.
Two people interested in cooperatives and geology can have discussions on both subjects by posting on the cooperative branch and the geology branch. People who join WeCo due to other interests might also get interested about cooperatives.

I want to use WeCo for hosting the convocation for Wobbly. I really like the branching structure, and you guys have a lot of good ideas for where you want to take this thing.

I know Leire Luengo, ICA Comms and will talk to her about this idea.

Sounds great, I’m not entirely sure if I understood correctly. Can you elaborate a bit about what you plan to suggest to ICA?

I’m guessing about the idea of an worldwide co-op forum.

Your post is fantastic (as always) Leo, full of information. When I get back from holidays I’ll have a good look at Weco.

Sorry that was referring back to @SteveGill and @chris’s suggestion that it might be useful to get at least endorsement/word of mouth about a global coops Discourse forum backed by the International apex organisation.

Perhaps what’s needed here is some sort of federated approach. Mastodon - as used by https://social.coop uses the ActivityPub federation protocol to enable different Mastodon instances to share content. Mastodon may not be the right tool, but the content federation feature feels to me like a very good fit.