I’ve started a new platform cooperative/democratically governed fund. Here is an article about it, but a short explanation is this:

I got the idea after adding 9 mentions of coops to popular Wikipedia articles ranging from “France” to “The Internet” (see image attached), with combined 32 million views/year. It took maybe few hours to add the mentions, so this seemed like a rather effective way of doing outreach. 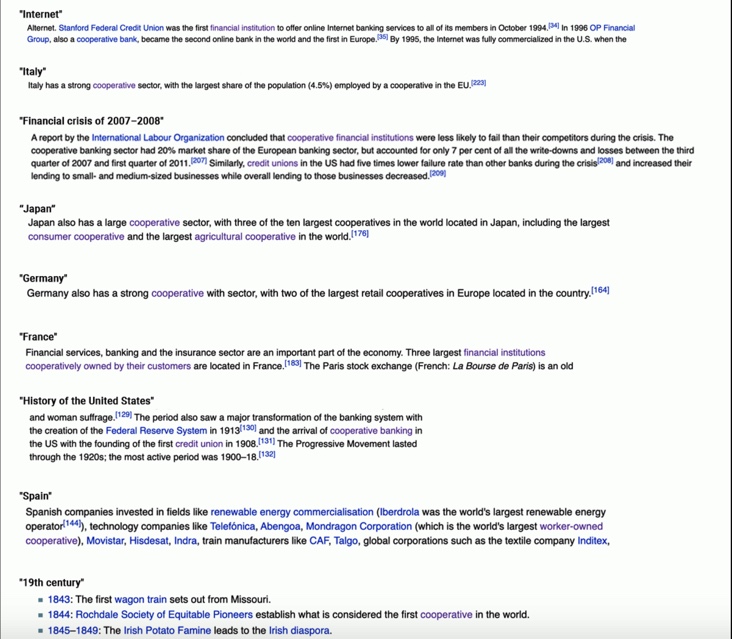 Eventually I would love to build the articles into a Wikibooks (a sister project of Wikipedia) project about cooperatives - an ever expanding, regularly updated, comprehensive and collaboratively written text book about coops.

I would also like to build a new coop template (a thing that it’s in the bottom of coop related articles) for Wikipedia - I’ve attached an image of what it could look like.

This is not against Wikipedia guidelines, as long as everyone discloses their affiliation openly.

Really nice idea for a template. As it happens our co-op accountant (in Manchester) is a co-op, and they are interested in networking with other accountancy co-ops, of which there do not seem to be very many. So for the template, I would suggest maybe “Finance” rather than “Banking”, and accountancy could be a leaf page?