I hope this doesn’t end up going the way that so many of these things appear to go (think Oracle / Sun / OpenOffice…).

My first Linux distro was RedHat (5.2 in 1998), before RHEL, Fedora or CentOS existed, I became a RHCE in 2005, but that has since lapsed — I switched to Debian over a decade ago and have no regrets, as a community GNU/Linux distribution it is impossible to conceive of it being brought out by a global corporation (Ubuntu on the other hand…).

I switched to Debian over a decade ago and have no regrets, as a community GNU/Linux distribution it is impossible to conceive of it being brought out by a global corporation (Ubuntu on the other hand…).

Maybe it’s time I switched from Ubuntu to Debian. It’s laziness that encourages me to use Ubuntu (e.g. I know I can get a laptop with Ubuntu installed, and all of the features of the laptop will work as expected). But I’m a big fan of laziness. Am I likely to experience pain moving to Debian?

Am I likely to experience pain moving to Debian?

I doubt it, especially since the Ubuntu decision earlier this year to drop the Unity 8 desktop and switch to GNOME.

Debian stable, currently Stretch, is starting to get a little old (it came out in July 2017), so it is worth enabling backports for some packages (for example Ansible) and this can now be done during the install. You will probably also need to enable “non-free” in order to get things like WiFi working, again this can be done when running the installer now.

One thing that works well for me is booting the Debian installer over Ethernet. Since I have OpenWRT running on my home and work router, I can easily set the router up as a PXE boot server with a Debian stable image — this means that to install Debian on any machine you simply need to plugin in a Ethernet cable, access the BIOS, set the machine to boot from the network and then it boots straight into the Debian installer, no messing around with USB sticks or CDs.

I wish Debian would recreate some of the usability tweaks that Ubuntu adds. It’s very bare bones by default.

I’m currently using Ubuntu 18.04 for my daily driver because I had some weird problems installing the non-free WiFi drivers (damn Intel motherboard). Will hopefully jump over to Debian for my main laptop when the next stable release comes out. At Autonomic, we use Debian on all our servers already.

Will a shock of cultures drive Red Hat’s technical talents away? Will IBM try to cut costs and lessen the resources invested in supporting open-source communities? Will they change the transparent and inclusive governance we saw in Ansible, or could their big business image, encourage some to fork out and compete with IBM using Red Hat’s own technology? Will IBM invest in making the code less complex, despite the profit opportunities that could come from having a dominating technology that requires the consultancy of experts to be properly used? The biggest risks to the deal’s success might come from IBM themselves. No wonder Ms. Rometty will keep Red Hat as an independent company, despite the billions she used to buy it. 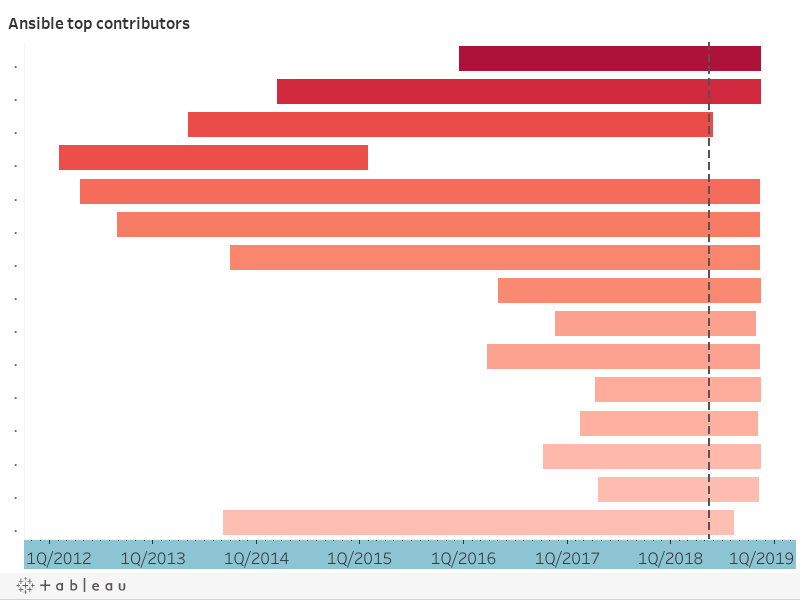 Red Hat's Hidden Treasure Avalia, a firm specialised in providing software due diligence for M&A shows the data behind the people worth billions to IBM.

The enforced sharing of the GNU GPL is perhaps the greatest threat to corporations like IBM.

RedHat has historically been a strong supporter of the GPL, despite making a huge amount of money selling code and services to many states and corporations.

It is no coincidence that corporations like Google, Facebook and Amazon are supporters of BSD / MIT / X11 / Apache permissive licenses and are opposed to the GPL.

When RedHat ditched RedHat Linux and switched to RHEL and Fedora most people in the Free software community seemed to think this was a terrible thing, I though it was great and I still think that “the principles that preside over the logic of free software contain important elements of communist theory”, but, even though over 16 years have passed, it is perhaps to soon to make a judgement regarding how things will work out between Free Software and Market Relations…

between Free Software and Market Relations…

Enjoyed that, thanks for sharing!

Resurrecting again because I now see some changes on the horizon with Ansible, RedHat’s flagship configuration management tool:

Looks like they’ll crack up the project and break it into parts, with support for some and not for other parts. It looks pretty similar now but it is a big move. As a lot of people are into Ansible here, it’s worth a eye ball.