Over the years, sessions on shared infrastructure have kept on resurfacing at CoTech gatherings, e.g. autumn 2017, autumn 2018 and spring 2021.

Most recently, at the gathering in September this year, a session on shared infrastructure focused on exploring potential use cases for an emerging project within CoTech - Servers.coop. The idea is to easily spin VMs, clusters and apps.

As some of you might have seen, earlier this year 14 compute and 2 storage blades were offered to the initiative and the plan is to plug them in the data centre in Ashton run by Cooperative Network Infrastructure. The plan is to set the servers up in the near future - to be carried out by @Liam from MediaBlaze Hosts.

Servers.coop have been testing capsul-flask developed by Cyberia Computer Club based in Minnesota, US. The software is currently in alpha, suitable only for development use.

Needs in the network

After the gathering we circulated a survey about current use of servers at CoTech co-ops. We received 13 responses over two weeks. Will leave investigating the results to those interested, just a few quick highlights:

It would great to hear everyone’s thoughts about the topic of shared infrastructure and Servers.coop in particular. Curious to understand the needs of Servers.coop in order to make their service operational and potentially useful to co-ops at CoTech. Is there a roadmap? Is there something we can do as the network to support your effort? Would appreciate discussing not only the hardware/software side but also the business prospects!

@shaun @chris @decentral1se @3wordchant @graham @liam and others involved, please feel most invited to edit this post to mitigate potential mistakes I’ve made.

Disclaimer: Animorph is not officially involved in Servers.coop, but we are interested in using the service, for now in development/testing capacity.

By the way, Shared Infrastructure / Servers.coop team meets every Friday at 3pm, so the next call is in (less than) 2 days in SALLY FLOYD room on Meet.coop - everyone is welcome to join!

This is a super interesting conversation!!!
I am currently planning/ working on a similar idea about tech and tool stack for non-profits (and possibly others).

What is the easiest way to get in touch with this project in order to understand possible overlap (assuming that high-jacking the team meeting mentioned above) is not appropriate?

Reflections on the possible structural form for servers.coop

In order to trade and operate, servers.coop will need:

It is often assumed that these requirements are one requirement, and that they are satisfied by creating a new incorporated body (eg a cooperative society) which then “is” the cooperative. We haven’t done this as yet.

Alternatively the business could be launched as a new activity within an existing cooperative. There is no appetite for any one CoTech member to do this. CoTech itself isn’t incorporated.

We, CBN, suggest instead that servers.coop could become a project - perhaps the first project - for a body we are helping to set up called The Innovation Cooperative (TIC).

The idea with this is that startups should be able to focus on building the business case and the business rather than worry at too early stage about things like legal personalities and legal governance frameworks.

Concept of the Innovation Cooperative

The key concept is that TIC shifts what would otherwise be a matter of contract into its own governance. Contracts (brittle) are replaced with cooperative agreements (flexible) underpinned by shared values and protocols.

A loose metaphor is the Eden Dome:

With time TIC will host many ventures. servers.coop could be one of those. It would also have a role to play as a provider of shared infrastructure.

Where the idea comes from

The body is being incorporated itself now. It has a group of founders including:

The question sometimes asked is whether servers.coop would be a multi-stakeholder cooperative. I think the answer to this is ‘of course (er but what exactly do you mean?)’

Do we want to spend time worrying about that now, or work on the business case and strategy?

By shifting those issues away from a legal (brittle) question now, to let the answer evolve within a larger, (flexible) governance framework based in shared values and principles.

Thanks for this solid feedback folks! Great stuff. @DonDFH you can come find us on Matrix via this invite link (using Element) or mail via hello@servers.coop

Heya folks! Thanks so much for kicking this off @SzczepanOfAnimorph

I said I’d drop in and sprinkle some words about the business plan so far, and I can also share have some news from our call with the current maintainer of the donated hardware.

Note: we’re having a session on the business plan this Friday, these are some very early thoughts!

Our main audience is coöps and other democratic collectives: people who care about ethics, and / or whose clients do.

We are initially targeting replacing cheap megacorporation services, not replacing (and certainly not competing with) existing coöp hosting options. As an example, at Autonomic we try to recommend Web Architects servers wherever we can – but there are many clients who don’t need the level of reliability or support that Web Architects provide, and don’t have budget to cover the (very understandable) cost difference vs. other providers.

We’re inspired by Cyberia Computer Club for our first step, who have been operating their Capsul service for a year, offering cheap, “best effort”* VPSs using an automated open-source platform. They’re already covering their own hosting costs through their revenue, and building up a surplus to purchase new hardware.

In case a very rough diagram is helpful: 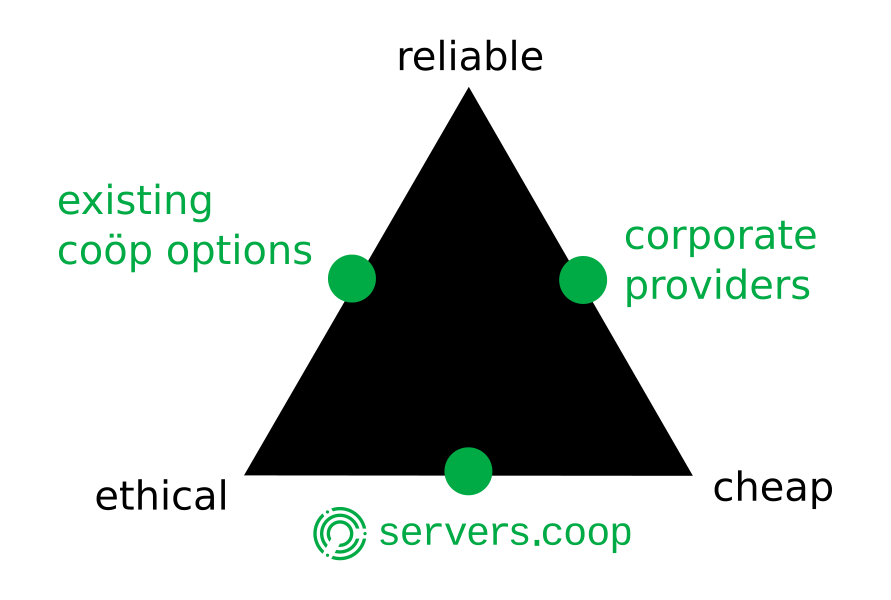 As well as the general needs identified in the survey that @SzczepanOfAnimorph organised, we’re already in contact with a few groups who are interested in specific servers.coop hosting, including Cotech members, a couple of Mastodon instances, some community projects, and some of our Autonomic clients.

Again, we’re meeting this Friday 5th November to numbers some more numbers and work out how many commitments we need from people to be able to launch, and what other sources of funding we might be able to tap.

It looks like we should be able to start with a couple of the “blade” servers relatively quickly – they all come with hard drives, they are mostly in working order, and it looks like the current owner of the hardware might be willing to do the necessary firmware updates for us

This means we could easily launch an alpha service with 2x 32GB RAM physical servers (probably 15-30 virtual machines on each, depending on size), and then scale up cheaply by firing up (and possibly buying warranty cover for) additional blades. Having additional blades also gives us the option of setting up some kind of backups or redundancy, if initial clients demand it (and can pay

We might be able to get some donated IP addresses for the initial launch as well. Either way, they’re pretty expensive, and it’s possible that we might have limited IPv4 addresses to begin with. This may mean that we offer cheaper servers if they’re IPv6 only (our comrade already did the work to add IPv6 support to Capsul), and/or that we aim to start with larger VMs, e.g. build / continuous integration servers.