Below please find CoTech Fund report for the pilot year 2019. You can download it in PDF format from our Nextcloud instance.

At the Space4 Hack in November 2018 a working group on Governance and Membership developed a proposal for an internal fund.

The purpose of the fund was to pool our resources and strengthen the CoTech network. During the pilot year participation was voluntary, and participating co-operatives contributed £1 per member per week to the fund.

On 8th February 2019 CoTech approved a one-year pilot fund to test the idea.

During the gathering in Sheffield 2019 we workshopped more details of the fund, considering different ways we could process and manage the shared resources. During the final discussion at the gathering, the following immediate and longer-term expenditures seemed relevant:

For complete minutes please refer to the document on CoTech Nextcloud.

Members of Animorph, Go Free Range and Outlandish volunteered to become signatories of a CoTech bank account, which was set up with Unity Trust Bank.

At the time of proposing the pilot fund project we considered establishing an equivalence between time and money, such that co-ops who could not afford to contribute £1/member/week could contribute equivalent time. There has been no further interest in developing that proposal.

There have been two spending proposals submitted, based on the discussion in Newcastle:

We originally proposed using CoBudget to decide what to fund. At the gathering in Sheffield we decided instead to facilitate spending using Loomio:

A group/thread will be formed at Loomio to screen potential spendings, primarily to understand how the fund can be used, what do we want to spend money on. A person/co-op can suggest what they want to spend money on and members will have a week to inspect the notion and block it if they disagree. If there are no objections, the spending is approved.

It’s not clear whether the lack of engagement with the two spending proposals that we have funded this year indicates consent from all 8 members, and we need to think a bit more about how best to encourage engagement.

Integrating the Fund into Governance of CoTech

At the gathering in Newcastle December 2019 the fund was included in the scope of Governance & Decision Making working group.

The challenges the group diagnosed were the following:

Trying to address these and knowing that the pilot year was soon to approach its end-date, the working group came out with two intertwined proposals:

These were approved for putting forward for a vote on Loomio, which happened shortly after the gathering. Both proposals were passed on the 16th of January 2020.

Starting from the 28th February 2020, we will begin collecting co-op fund contributions for the year 2020, which will secure voting shares for members of respective co-ops.

Contributing co-ops will be encouraged to request Loomio accounts from treasurer@coops.tech if any of their members do not already have one. At the end of each vote on Loomio, the votes will be counted and compared against the list of co-ops that contribute to the fund.

We have outlined a decision-making flow that builds on the Governance Circle Calls agreed on during the gathering in Sheffield. 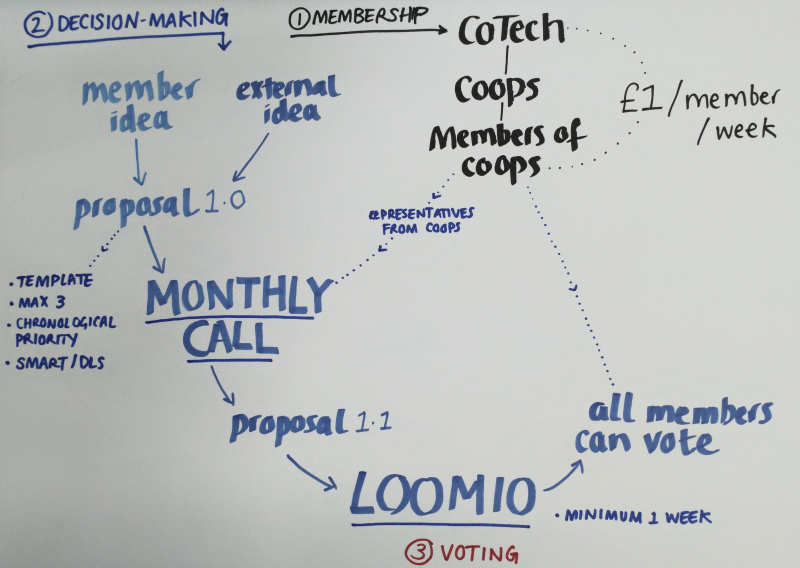 As highlighted by CoTech members taking part in the discussion on Loomio, our decision making process will continue evolving. The discussion about specific improvements will be brought to the Governance Circle Call in March 2020 to amend existing procedure before the coming CoTech gathering during Worker Coop Weekend.

Many thanks to everyone who has contributed to the process in any capacity. The work is far from finished, and everyone is welcome to join the process!

This morning @chrislowis shared the outcome of the proposal regarding integrating fund into CoTech governance via voting shares. It was influenced by the discussion we had at the February General Circle Call. Please have a look at the outcome linked to above as lack of wide information distribution was an issue raised during the call.